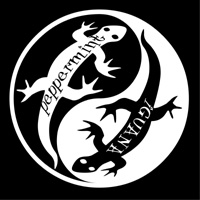 The main focus is the DIY music scene – bands that release their own music, grass roots labels, small gig promoters, grassroots festival, fanzines and community radio stations and so on.

It is a labour of love, so we stick to the music we love. We have eclectic tastes, from punk to afro-beat, from soul to dub reggae. For the zine we tend to lean towards bands that are likely to be found playing underground festivals, or the fringe stages at bigger festivals, but anything can and does turn up on our pages.

Although mainly focusing on music, we also have a rebellious anti-capitalist streak running through us, so the zines have often featured articles on things like the G8, NATO, squatting and No Borders. We have even had the dubious honour of having an article written for us by someone who we later found out to be an undercover cop spying on the scene!

The Peppermint Iguana collective was set up in 1995 with the aim of producing a fanzine and promoting gigs in South East Wales.

Initially we started putting on gigs in our home town of Blackwood, then eventually moved on to venues in Newport, mainly the Legendary TJs nightclub. We also wrote, designed and self published a series of old fashioned paper fanzines. With the rise of the internet we slowly moved away from paper zines to concentrate on the webzine. What you are looking at here is the third incarnation of the website.

In the early days there were around a dozen of us that would muck in with fly posting, feeding the bands, decorating venues, DJing, taking money on the door and even giving haircuts on stage. The numbers involved on a regular basis dwindled with time and we are now down to a core of two, although the others would no doubt come out of the woodwork if required.

In 2011, we set out to do an article on community radio station Dapper FM based in Aberdare. That article has yet to be written, but we now have a regular fortnightly radio show on the station, are part of the station’s management committee and have been involved in fund raising for the station.

To mark the 20th anniversary of Peppermint Iguana we moved from the old website and this new version should be more interactive and easily searchable. We will be uploading all the old stuff from the last website but we also have loads of new stuff coming on line shortly.