They’re back. Radical Dance Faction,  Back to the Planet and Culture Shock bring their Radical Planet Shock package to sarth Landan.

By the time we got to the venue we were well warmed up. Our first pint had been in Victoria coach station at 11am and it was basically a non stop pub crawl across London for the next nine hours.  That might explain how we managed to walk right passed the pub twice before finding it.

Timing was almost perfect,  as we walked into the rammed south London boozer Culture Shock were just getting ready to come on.

I’ve seen this tour package a few times now and they vary the running order each night. And everytime it makes sense. When Culture Shock have headlined it made perfect sense. Reflecting back now as I sit on the coach home, it made perfect sense for them to open for this show. It’s weird how it all works.

Having seen the Subhumans recently it is fresh in my mind how they smashed it in Cardiff. But I have to say, of all the Dick Lucas projects,  Culture Shock have always been my favourite. Stalwarts of the 1980s free festival scene. They were one of the first to bring a reggae / ska element into the 80s Anarcho Punk scene. They were also more positive and less depressing than many on the scene, although lyrically still reflecting on the ills of the system.

As soon as they hit the stage the dancefloor fills up. Dick is his usual energetic and cheerful self, running around like a wound up toy.

It is beyond me how he can write the songs for three different bands,  let alone remember them all.

Numbers from the original Culture Shock albums of the 80s are thrown in alongside tunes from the two albums recorded since their reformation in 2013..

As I type this post it occurs to me that I’m writing about a gig featuring three bands that split years ago and have reformed. It does not feel like some sort of nostalgia trip or revival show though. Each of the bands left the scene with unfinished business and each of them have recorded new music, to make sure this is not just a trip down memory lane. And all three of them have produced new material that is at least as good as the old stuff, if not better.

Yes there are old heads in the crowd, but there are also many that would not have been born when the Shock first split. And both the old gits and the young guns are ‘avin’ it on the dancefloor. 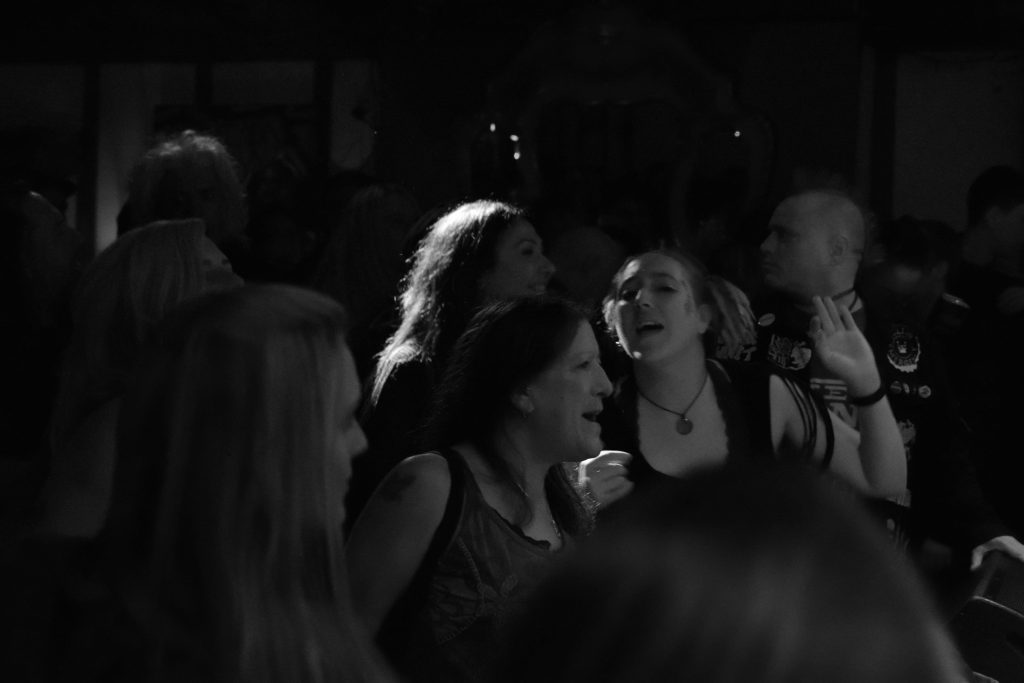 After the Shock we discover there is a beer garden out back which is twice the size of the pub. It has a couple of fires burning, fairy lights and funky psychedelic graffiti on the walls. It looks, sounds and indeed smells like a festival.  There is a lot to like about this venue.

The beer garden empties as RDF take to the stage. Chris Bowsher is the unlikliest of front men. Skinhead chic with DMs and Harrington,  but a fine head of dreadlocks. His vocal style is pretty unique, almost talking rather than singing, with an accent I’ve not really heard anywhere else.

Not content with just singing he almost conducts the band, waving his ever present unlit rollie like a baton.

But this is a band with a pedigree, each of them having several musical projects on the go outside of RDF. Dub the Earth, The Rhytmites, Pama International and Dubsouls are just a few of the names that would appear on one of those Pete Frame family trees of RDF.

They are tight and well oiled, bringing their collective experience to the party ,and dubbing it up like the best of them. They create groove that would move most resistant of dancers. The crowd ripples and bounces like the incoming tide bringing the Landing Party onto the shore.

Then we have a break and I head for the bar. This has been the only downer of the night. I rarely criticise workers doing their job, but the bar staff seem to have been determined not to serve me or my mates all night. Others have come and gone with the minimum of wait but each round for us seems to involve a minimum of a twenty minute wait. And it wasn’t a case of them not noticing us because ten of those minutes involved us arguing with them.

Birthday girl Fil and Back to the Planet are tonight’s headliners and they are determined to make sure the night ends with a bang.

With half the band able to make a decent living out of DJing their sound inevitably has more of an electro flavour that the others and a more bouncy/dancy vibe.

Guitarist Fraggle ensures they keep a rock and roll edge by laying down some pretty decent riffs, alongside the usual ska chops to put the ska into the ska-punk element of the band. Although his rock and roll credentials are dented  by him having a kettle and a teapot at his feet by his pedals to ensure he can maintain his caffeine levels during the set. No biscuits were spotted though.

When it comes to the releasing of new material these guys are a little slower off the mark than the other two bands since reforming fourteen years ago. But they have not been stagnant, tracks from their recent Kick It EP are stacked between the old standards and we even get newly written but as yet unreleased material.

When we interviewed the band back in 2005 drummer Henry had expressed disappoint with the early album on London Records because its production was a little too ‘nice’. This is reflected in the live set with all those old tunes sounding far more ‘avin’ it than the album.

From start to finish they rock the place. This is, after all, home turf for a band that was born out of the south london squat scene.

Eventually the live music comes to an end and we drift out for one last chill in the beer garden. The music is set to continue till 4am with various members of The Planets on the decks, but we dont plan on having any more dealing with the bar staff so head out into the South London night and head for our hotel – which turned out to be a longer walk than it looked on the map.

Nights like this dont come around very often, so you have to make the most of them. And we milked this night for all it was worth and all expectations were met by all three of these legendary bands. Even the long walk to the hotel or moody bar staff were not going to wipe the smile off our faces.