All Roads lead to Glastonbury for the Beltane weekend.

All Roads Festival was a late comer to our party, but was the final piece in the jigsaw for what was to be an amazing, psychedelic, rocking weekend.

First piece of the jigsaw was tickets to see Earthless in Bristol on the Sunday night. They don’t come to the UK very often and they were playing one of our favorite venues, the Thekla. Second piece was an invite from a coven of witches to spend the weekend in Glastonbury to celebrate Beltane. A magical weekend was already on the cards, then our man Grant announced …

“Everything is now in order for the first mega party that I’ve organised in far too friggin’ long!

I forgot how much I enjoyed bringing together a bunch of talented and beautiful buggers and indulging in the magnificent chaos that ensues!

For those of you that don’t know, I have organised a massive wreck-up-road-trip-party down to Glastonbury Town from April 29th to May 1st for All Roads Festival. I’ve booked a stunning campsite at Paddington Farm Trust and most of the finest minstrels Cardiff has to offer to play The King Arthur and you are all welcome to come and indulge in the magic”.

So, the scene was set and come the day, we packed the trusty Iguana Mobile and headed down the M4 and M5, rolling into the mystical town of Glastonbury by lunchtime on the Friday.

Glastonbury has become famous because of the Glastonbury festival, one of the biggest music and arts festivals on the planet – although ironically, it doesn’t actually take place in Glastonbury. The festival takes place in Pilton, a few miles up the road, but latches on to the magical reputation of Glastonbury, with its mysterious Tor.

Beneath the Tor, it is said, there is a hidden cave through which you can pass in to the fairy realm of Annwn. There dwells the lord of the Celtic underworld Gwyn ab Nudd with the Cauldron of Rebirth.

Later tradition has it that here lies the Holy Grail brought here by Jesus’s uncle, Joseph of Arimathea. The Cauldron and the Grail were both the object of quests for King Arthur and his knights.

Glastonbury has a long tradition of being ‘The Isle of Avalon’ where King Arthur went after his last battle. The monks of Glastonbury Abbey claimed to have actually found his grave in 1191.

Jesus is said to have come to Glastonbury as a boy, traveling here with Joseph of Arimathea. Joseph was a tin merchant and had travelled to the South-West for this valuable metal. This legend inspired William Blake to write the famous poem ‘Jerusalem’;

Without unpacking, we glided straight past the magical emporiums, followed the ley lines and straight into the pub. The sun shone, the cider flowed and the witches cackled. Eventually we poured ourselves into the King Arthur (the pub, not some mythical burial chamber), ready to rock.

Friday night’s line up was headlined by Dactyl Terra – which had our appetite whetted A) because they are bloody awesome (see review of new EP) and B) Because we wanted to shamelessly plug the fact that they are playing a gig for us in Newport on 12th May (shamelessly plugged again here).

Other bands on the bill included Nigel, Mondo Wave and King’s Alias. I’ll be blunt, I knew very little (as in absolutely nothing) about these before the night. And after an afternoon drinking witches brew and unicorn sweat, we were not entirely sure whom was on the stage and when. 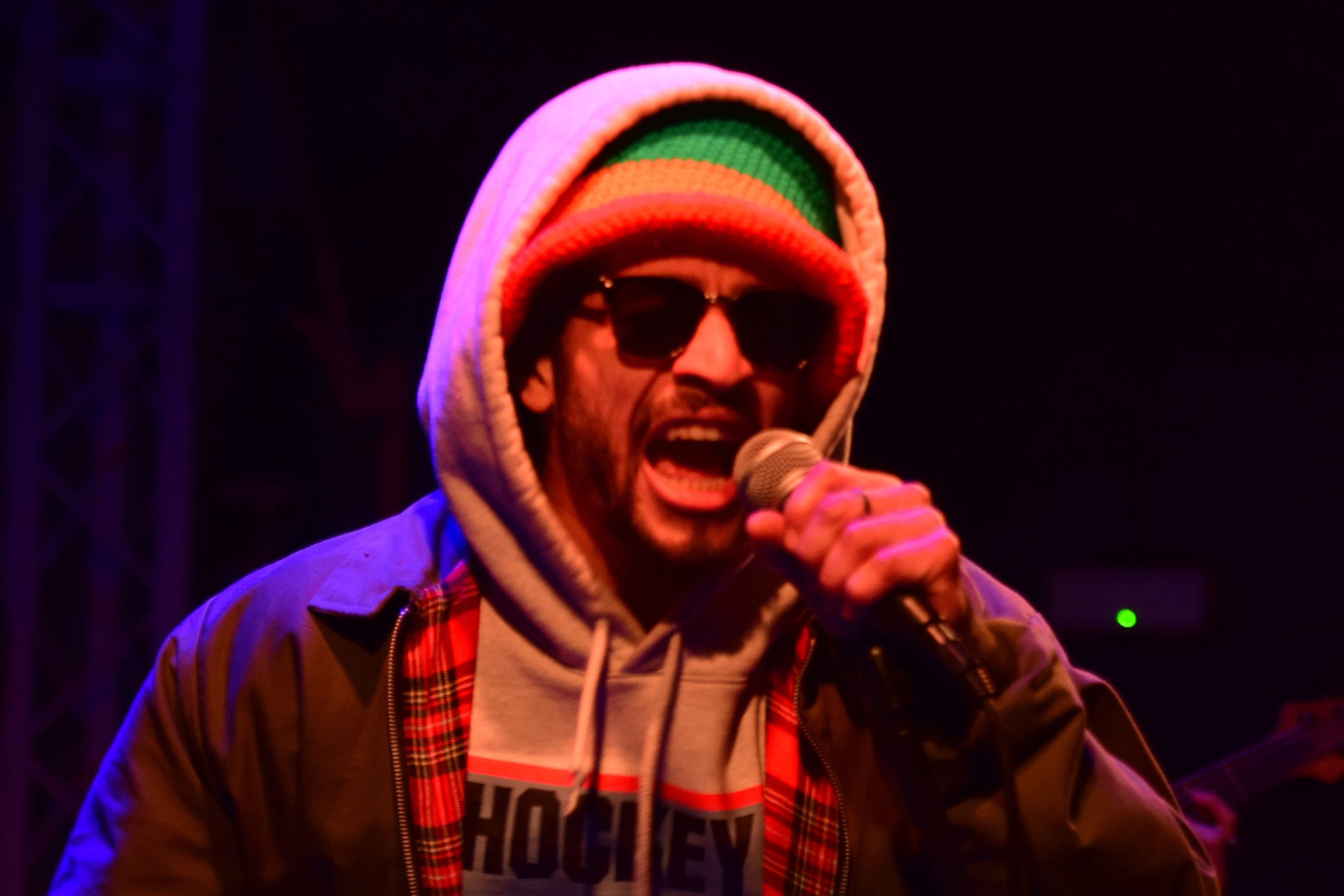 However, several things did become very clear. Firstly, looking at the bands on stage and the audience around us, it is clear that there is a new generation of music lovers that are not putting up with simply being spoon fed bland commercial chart pop, but are grasping live music with both hands and exploring the funky and psychedelic side of heavy rock. There appears to be a scene in Cardiff that has deeper roots than I had previously thought. And it is not just old codgers trying to come up with variations of what they have been doing for decades. It is a healthy, youthful and vibrant scene with a future. It filled me with hope and joy.

And then comes Dactyl Terra, who are, yes, young heavy and psychedelic. And Welsh. They play a blinding set and have the packed house up riding on their groove with smiles filling the room from start to finish.

Eventually we pour out into the night, heading back to the ranch, leaving the youth wing to party into the night whilst reading flyers for our gig. (Did I mention we are putting them on in Newport?)

Saturday morning, we are up bright tailed and bushy eyed. After a hearty breakfast we are back in the pub. Now, one thing we had failed to do was, find out what time the music started again. So a gallon of cider later we rock up The King Arthur and find that we have missed half the line-up, including ‘The first major full “LOUD” band show’ from Aberdare’s very own Mahouts. Missing them was a bit gutting, as we are actually familiar with these guys (possibly because the members have been on the scene since before many of the other bands were born).

We make ourselves comfortable in the beer garden, soak up rays, catch up with old friends, make new friends and – erm – drink more cider.

Eventually we head in to catch I Am Drug (yeah, definitely not as youthful a line up as Friday) who put one hundred and ten percent in to their show, including stage props and breaking down the barriers between audience and band by actually going onto the audience to play.

Cosmic Nod are a bit of a supergroup(ish) featuring Owen and Doc, former members of Cardiff legends, the now defunct Witches Drum, and Luke Llewellyn, who is so up for it he is playing in three bands this weekend (Dactyl Terra and Milk). They play a blissed out psychedelic instrumental brand of rock that seems to blur around the edges of reality, creating a luminous fog clouding the brain. We likes them. A lot.

The youthful theme returns when Chroma hit the stage. They are a three-piece and “Their sound fuses Garage Rock with Math influences”. Their words not mine. I’ve never really got to grips with the term ‘Math Rock’, and what it is supposed to be, but after their set I know that when it is mixed with Garage, I like it.

The Chroma set gives Luke a chance to recover and drag Grant and Marcell out of the beer garden for the Saturday night finale. The Biggest Thing Since Powdered Milk. Anyone that has read this blog before, or heard our radio show (or talked to me for more than ten minutes in a pub) will know that we loves a bit of Milk. When the witches had tried to make me drink Bloody Marys at eight thirty in the morning I had responded, “be gone with you evil temptresses, for I wish to be still standing when the Milk is spilt onto the stage”.

Okay, so I was a bit wobbly by the time they came on, but I was of sound enough mind to be blown away by them, yet again. Their mix of killer riffs, psychedelic blues and sharp wit make for a guaranteed good night out. And Marcell’s new haircut brings a bit of sophisticated style to the proceedings.

They are one of those bands I watch and every time I think to myself “why are these guys not playing to massive crowds?” quickly followed by “please don’t ever get big, I love exactly where you are, playing intimate gigs to passionate crowds and filling venues with love.” And there was a lot of love around.

Sadly, their set had to come to an end, but it left this old git smiling and glad he is still going to gigs. Whenever anyone asks “which decade do you think was the best for music?” I always reply – now. Nostaligia is not what it used to be and I love the fact that new bands are constantly coming through and making it a great time to be alive.

Sunday came along and the streets of town were filled with mythical beasts, Morris dancers and shamen – it was, afterall Beltane.

The Sunday line up for All Roads included more of our favourites, including Joe Kelly, Suns of Thunder, Pigeon Wigs and Lacertillia. But we had to tear ourselves away and head for Bristol to catch Earhtless. We’re pretty sure The King Arthur rocked for a third night though.

Come on Grant. Let’s do it all over again next year.

FOR MORE PHOTOGRAPHS OF THE WEEEKND VISIT OUR FACEBOOK PAGE